Both groups are well aware that workers have called for a boycott of the hotel to fight abuse. But PTWA leadership has not agreed to meet a Hyatt worker to hear about why they called for a boycott. Events have suffered low attendance when taking place at these boycotted venues.

Workers at the Grand Hyatt Seattle and Hyatt at Olive 8 called for a boycott nearly a full year ago, after years of struggling for dignity and respect on the job.

Olympic PT of Washington, a local firm with locations throughout the Seattle area, has many practitioners involved in APTA and PTWA. Olympic PT is the Official Medical Provider of the U.S. Snowboard Team, the U.S. Ski Team, and Seattle Storm.

Olympic PT has remained silent about APTA and PTWA violating the boycott. The founder J’Anna Post lives in the Seattle area. Over 50 concerned community members entered the lobby of the Grand Hyatt Seattle on July 29th and asked to speak with the General Manager of the hotel, Steve Vissotzky.

The group waited for about 10 minutes, and when management never materialized, clergy led two prayers in support of the workers. After leaving, the group rallied across the street.

The action was covered by the Seattle Gay News here.

UNITE HERE Local 8 is proudly endorsing Pramila Jayapal in her run for the open State Senate seat in the 37th Legislative District. Jayapal’s long history of standing up for Seattle’s hospitality workers has led to this enthusiastic early endorsement.

“We got to know Pramila during the Immigrant Workers Freedom Ride in 2003. Since then she’s been a tireless advocate for the rights of hotel, restaurant and food service workers. We couldn’t imagine a better advocate for working families, immigrant and women’s rights in the State Senate,” said Erik Van Rossum, President of UNITE HERE Local 8.

Jayapal has stood with Seattle hotel workers and led community delegations demanding health and safety protections for hotel housekeepers from corporate hotel chains, advocated for paid sick days in Seattle, and has been one of the leading national voices for comprehensive immigration reform, a top priority for UNITE HERE nationally.

The Specialty Coffee Association of America (SCAA) is scheduled to violate the worker-called boycott of the Grand Hyatt Seattle and the Hyatt at Olive 8 for years to come. SCAA has done excellent work around fair trade issues globally, but the organization may have a blind spot to the working people in their own backyard.

Fair Trade USA is not staying at the boycotted Seattle Hyatts, and Equal Exchange has already sent SCAA a letter encouraging them to honor the boycott. The Washington Fair Trade Coalition also endorsed the boycott. SCAA will bring 10,000 visitors to Seattle nearly every year until 2021–one of the biggest conventions in the city, giving it an enormous amount of consumer power.

Executive Director Ric Rhinehart and the SCAA board of directors have received multiple voicemails, letters, and emails since August 2013.  Some board members have even requested not to receive any further information about workers’ rights violations at their Symposium hotels, despite the SCAA’s position on Fair Trade Position stating a commitment to “consciousness of social issues.”

Housekeeper Min Yi Li at the Hyatt at Olive 8 reports cleaning with nothing but a rag. Workers at these hotels have no job security, and some have reported an increase in outsourcing in recent years, a precedent that threatens full time jobs.

SCAA updated its Fair Trade position statement in 2008, stating a commitment to “consciousness of social issues.” The statement outlines the creation of a Fair Trade Task Force in 2000, but nothing about that task force can be readily found on their website. The organization’s bylaws also outline a “Restriction against profit and activity inconsistent with the public interest,” although “public interest” is not defined in the bylaws.

To date, multiple organizations have moved events out of the boycotted Seattle Hyatts in order to support workers, including the non-profit Low Income Housing Institute and API Chaya, a women’s shelter. Hilton bellman and Local 8 Executive Board member Chuck Cruise was featured in a press conference held by Washington State Congressional leaders on the national minimum wage.

U.S. Sen. Patty Murray and Rep. Suzan DelBene on Tuesday brought their fight to raise the national minimum wage to $10.10 an hour to Seattle, where advocates want to raise it $5 higher.

Click here to read the rest of the article:

On January 27th, a delegation of over 30 concessions workers at the Seattle-Tacoma International Airport attended the monthly Port of Seattle Commission with an important message: protect our family wage jobs.

While SeaTac’s Proposition 1 received national media attention for its requirement that workers in the airport and hospitality industries in SeaTac receive a $15/hour minimum wage, it also provided other important benefits, such as mandated paid sick days and worker retention.

Worker retention means that if a new company comes into SeaTac airport and takes over the contract for concessions, current employees will keep their jobs.

Bizu Weldechiakos has been a busser at Anthony’s restaurant in the airport for 7 years. He told the commission: 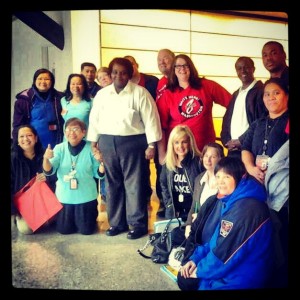 “I have dedicated my life to working at the airport. I believe I have earned the right to have job security. I have many friends here at the airport and they have families and dreams for the future. But those dreams cannot become a reality if our jobs are not secure.”

Jennifer Fulton, a server at the airport, spoke of wanting to send both her daughters to college, but not knowing if she would be able to afford it: “How can I tell one that I have the money to send her and the other one no?”

The Port of Seattle Commission has the authority to enact many of the provisions of Proposition 1 right now, including job security protections and paid sick days. Airport concessions workers will continue to push the Port of Seattle to enact these important provisions that are good for workers and good for SeaTac airport.